Home > News > A guide to the carnival season in ‘s-Hertogenbosch

A guide to the carnival season in ‘s-Hertogenbosch

It is the eleventh of the eleventh. This means that the Dutch Carnival season is about to begin! From this day until the 21st of February 2023, ‘s-Hertogenbosch turns into Oeteldonk. On 11-11 The town square, the Parade in Den Bosch fills up with real Oeteldonkers. The bells of the Sint-Jans cathedral ring and the town’s anthem is sung. At exactly 11:11 am, the carnival season will be officially opened.

As JADS we are located in the middle of the city and the carnival event is a tradition for us to host or be part of many informal events. Creating an even stronger community by being part of traditions and laughs like this. With a highly international oriented community we thought this post might help you all to soften the introduction to this big event.

The starting signal. Just a taste.

The opening of the carnival season in ‘s-Hertogenbosch in this form on the Parade square, dates back to 2010. Since 2011 (11-11-11) it has been bigger than ever. After the official kick-off on November 11th , the city center turns red, white and yellow. Musicians blow their first notes, boeren and durskes toast together to the start of carnival in Oeteldonk. Learn more about this local piece of culture admist the center of ‘s-Hertogenbosch. Our JADS campus is situated in the middle of the city center and the event is a tradition for us to host or be part of many informal events. That is also the power of our community! 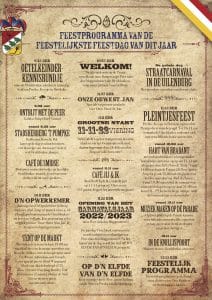 The official program of the festivities at 11-11-2022 ©Oeteldonk.org

During carnival, dressing up, music and parades reflect people’s creativity. The main explanation for the origin of the celebration is that people were happy that, after the often harsh winters, the days were getting longer again. A dark period ended and a period of prosperity, spring, arrived.

The power of Carnival for Oeteldonk

Carnival is often referred to with the word Vastenavond or Lent, which has to do with fertility. Actually, carnival was traditionally a feast in which people mainly celebrated the lengthening of the days and the fertility of crops, people and animals. Only later, under the influence of the Roman Catholic Church, carnival was directly linked to the church calendar and Lent. During the feast, people could have a good time before the austere forty days of Lent began. Evidence has been found, including in the Miracle Book of St John’s, that there was talk of ‘Lent’ as early as 1444. In short: the feast has been celebrated in Den Bosch for more than 550 years.

The traditional dress for the Oeteldonk carnival celebrant, has remained virtually unchanged since time immemorial. The initiated Oeteldonker is very easy to distinguish from a not quite initiated Oeteldonker or carnival revellers (temporarily) imported to Oeteldonk. Real Oeteldonkers wear a smock that they decorate with emblems and annual shields, thus adding a new element to the smock every year. According to old tradition, the smock should not be washed out, but only aired. 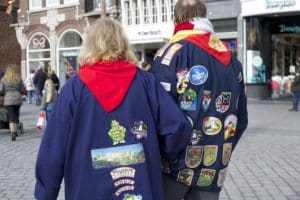 Unmistakably one of the most prominent symbols of the Oeteldonk carnival is the Oeteldonk tricolour red-white-yellow. The tricolour is omnipresent and flies proudly on numerous flagpoles, on many façades and also serves as an excellent remedy against the cold in the form of a woollen knitted scarf. The Oeteldonk tricolour can even be found on bumper stickers inside and outside the village borders! Trivia: every city has its own and different colors during carnival. Eindhoven for instance is orange-blue-orange and Tilburg green-orange. 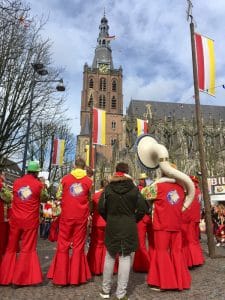 The (green) frog or frog bunting is a frequently seen symbol during carnival in Oeteldonk. Contrary to what many people think, the frog is not a reference to the word ‘Oetel’ in Oeteldonk, but more a symbol for the Oeteldonk swamp. Where exactly the word ‘oetel ‘ comes from then is not entirely clear. 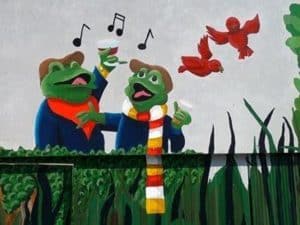 The Town’s anthem, written in 1884 by Driek Pakaon and composed by Hannes Krassert, is an ode to Oeteldonk. It is composed of three stanzas, of which in practice only the first is usually sung. It is loudly sung on the square in front of Oeteldonk Central on Sunday morning by thousands of frenzied Oeteldonkers. This is the day that the Carnival Prince arrives.  . The song is concluded with a three-word and loudly shouted “long live the Prince!” by Driek Pakaon. Want to sing along too? Start practising https://www.youtube.com/watch?v=e6nLGgT75RE

Student association at JADS, DSA Pattern, organizes a special pre-Carnaval Event. They also offer scarves and an emblem to meet the dressing requirements for Oeteldonk. Discover the possibilities via the event link here. 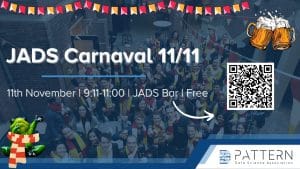 Want to know all about Carnival?

Then visit the Oeteldonks Gemintemuzejum and discover the rich history of a special (inter)national multicoloured celebration. Please note: during Carnival, parties are held and the museum is closed. https://www.carnavalsmuseum.nl/

JADS is a hotspot where researchers, data science students, start-ups, scale-ups and experts of the industry collaborate in developing cutting-edge, real-world solutions. Our ambition goes beyond being an academic leader in the field of data science.

Our aim is to play a key role in building a new ecosystem and accelerate the data driven economy in The Netherlands. We do this by connecting data science and entrepreneurship in many ways. From educating students and professionals to organizing events, to accelerating data driven start ups.