How Data Science can help ‘floating voters’ in Dutch elections

Dutch Data Science startup Quantile launches a tool that makes it easy for voters to compare programs from political parties, based on the words they use. 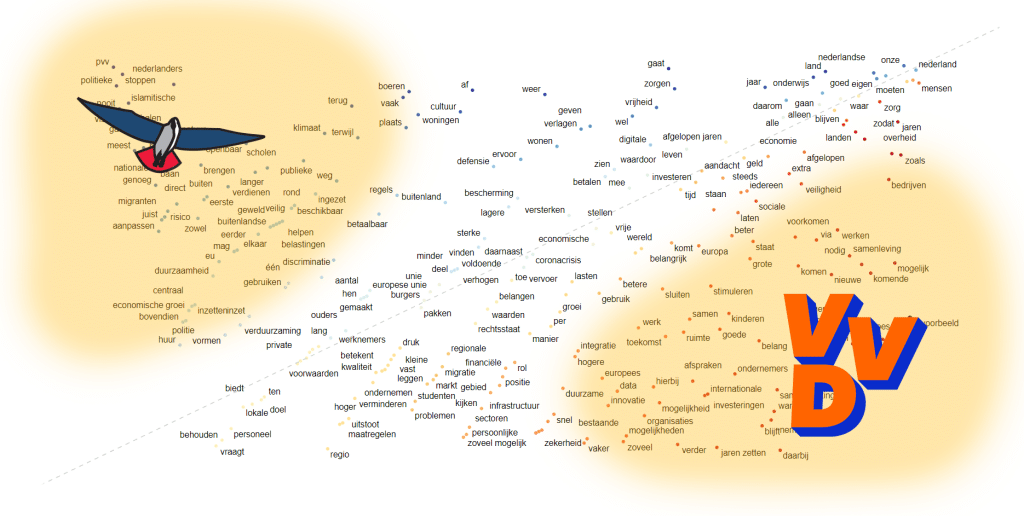 The Dutch elections on 17 March 2021 are getting close. So called ‘floating voters’ are struggling to make a choice between two or more parties. Based on the election programs, it’s hard to make a decision. But Data Science can do things that humans can not: process large quantities of information.

Quantile – one of the startups in the JADS Playground – presents to you the Party Comparison, a web application that compares two election programs. Users can select two parties they are interested in. These parties are then placed on both axes in the graph. In the visualization, users can see words from the respective political party programs. At the top left and bottom right, words are shown that are characteristic of the selected parties. When you click on a word, we highlight the sentences in the election programs that contain these words.

It gets more interesting when you start looking at those words that characterize the parties. This makes it easy to see where certain parties place their focus. You can see that the Party for Freedom talks a lot about “Dutch” and “Culture” and the preservation of that culture. In contrast, the VVD has a more economic focus, and talks a lot about “Companies”, “Economy” and “Entrepreneurs”.

Other uses for text analysis

The technology used in the party comparison tool, can be used for all applications where analysis of big quantities of text is useful. For example to support marketing analyses, such as analyzing customer reviews. But also to gain an overview of large quantities of documents and automatically cluster or categorize different subjects.

Quantile is a startup in data engineering, data analytics and data science. It is one of the startups in the JADS Playground, a startup incubator that helps startups from idea to launch and everything in between.