Home > News > The second edition of IDSFF was a great succes

The second edition of IDSFF was a great succes

From 3 to 5 November, JADS hosted the second edition of the International Data Science Film Festival; The one and only film festival dedicated to data science and AI. IDSFF discovers, celebrates and challenges the role of data science in our society.

The successful second edition of the International Data Science Film Festival took place from 3 to 5 November, 2022 at the beautiful Mariënburg campus. 3 days of films, discussion and lectures dedicated to Data Science.

For the festival, the chapel of the Mariënburg convent was decorated, creating an intimate and informal atmosphere. There was a bar on site, populated by study association D.S.A. Pattern, and visitors received a bright red IDSFF goodie tote bag to take home.

The 3-day festival kicked off with The Rise of Mega corporations on Thursday, November 3. Prior to the film, professor dr. Ksenia Podoynitsyna gave an introductory lecture about the impact of these mega corporations, such as Amazon and Google, on our society. She said: “In the introduction for the film, I covered how the platform firms grow and what are the side effects of working with the big tech firms for various businesses. The film continued this reflection by adding the negative implications for society. The discussion after the film focused a lot on finding the right balance: the platforms clearly create value and cannot work if they are too small, yet if they become big they can easily grow too big. Another part of the discussion focused on the implications of the EU data and platform regulations on the competitiveness of the European economy vs that of US and China.”

On Friday November 4 the second film was shown: iHuman. Peter de Kock, initiator of the festival gave the introduction to the film. The documentary showed a picture of what is currently and what might be possible in the (near) future. With the prospect of AGI (Artificial General Intelligence) visitors got an idea of a future in which AI outperforms humans on all terrains. Sparking questions like ‘what kind of society do we wish for in the future?’, ‘how much AI technology is good?’ and finally ‘What makes us human?’. The dialogue could be continued at the Pattern powered bar for hours. Between students, enthusiasts and professors. 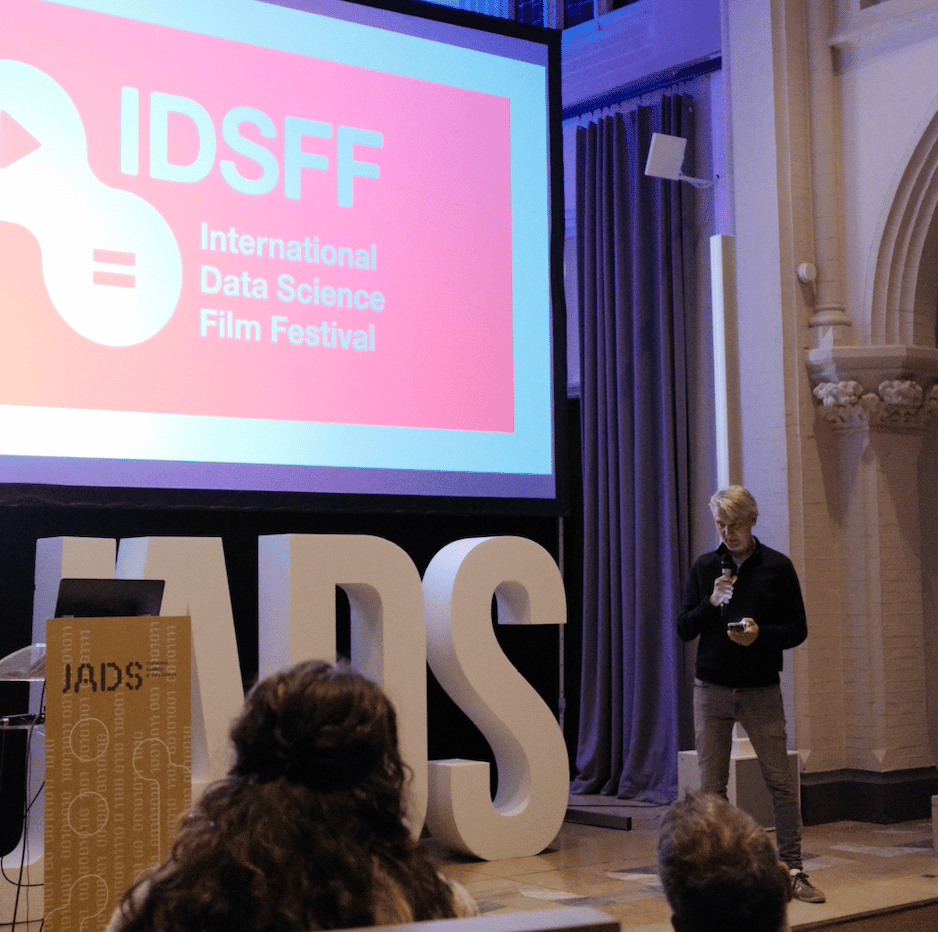 Saturday the film Interstellar was the last film to be shown at IDSFF. Eric Postma gave some explanation and background information about things in the film. Eric chose the film because: “The movie Interstellar connects AI with the fundamental physics of the universe and black holes. The former is my expertise, the second is my interest. Both come together in the study of the automatic detection of exoplanets with deep learning that Koko Visser, Bas Bosma and I perform at JADS. ” In his lecture Eric mentioned Kip Thorne, an American theoretical physicist known for his contributions in gravitational physics and astrophysics. Thorne, whose work inspired the film, acted as scientific consultant and executive producer.

In total, over 150 visitors attended the film festival.

Next to the films, lectures and discussions IDSFF also included a thought provoking video artwork from Mark IJzerman & Sébastien Robert in one of the JADS Room hotspots.

Still from the video art work ‘As above, so below’.

‘As Above, So Below’ brings together Mark IJzerman’s different ways of visualising and Sébastien Robert’s sonic explorations of the La Araucanía region in south-central Chile. ‘As Above, So Below’ specifically focuses on the shrinking amount of old-growth forest and biodiversity versus the increase in eucalyptus and pine plantations in La Araucanía, in which the indigenous Mapuche are about a third of the total population. Mapuche activists have allegedly been burning crops, blocking roads and setting forests ablaze in an attack. Co-produced by LIMA.

If you want to know more about the second edition or stay informed about a possible next edition, make sure to follow the Instagram channel of IDSFF  @idsffest. and keep an eye on the website www.idsff.org